The Dragonfly meets a Dragon

My whole experience started at Momo fish spa in Liberty Wharf, St Helier on Wednesday afternoon.  My boss had given me some vouchers for Christmas and I decided to use them on a gel manicure to try and make my jewellers nails look lovely.  Firstly I had a fish spa, oodles of little fishies nibbling away at my feet.  An unusual sensation, but my feet felt lovely afterwards (I could’ve used another one by the end of Saturday afternoon, but will get to that later).  Then on to the manicure, I’ve got very weak nails due to polishing silver pieces and they always look rubbish.  I’ve never had gel nails before, and I love how my nails looked after, I had a lovely raspberry colour with some added sparkle (of course).  They felt so strong and shiny!!

Thursday was spent packing, and watching the weather, snow was forecast in Birmingham and I was worried that my flight would be cancelled, but despite a light dusting of snow, the plane having to circle a few times and me waiting in the wrong car park for my taxi, I arrived in Birmingham.  Was gutted that during my travels I bent my thumbnail back and half my gel came off (not the fault of the manicure, as the nail was already broken).  I arrived at the Hampton by Hilton Hotel in Broad Street and met Sue from Let Me Learn, was great to meet her in person as we’d spoken on Facebook many times.  We arranged to meet the next morning and headed to our rooms for an early night!

After a lovely cooked brekkie, we headed off to the ICC full of excitement.  I knew by the time we got there, that wearing heels was a bad idea!  There was an awful lot of standing up, so I made the resolution that next year I was going for comfort over style (really beginning to feel old).  I was pleased to meet Steve from LRB Trophies who I’d got my lovely diamond #sbs winners trophy from.  It was strange trying to find people I’d spoken to online with only a photo to go on, much of the time was spent trying to look at peoples name badges without looking like a complete weirdo!  We also had a lovely chat with Dayle and his Dad from NW Design from Wigan.

And then, it was Theo time!!  We took our seats and Kypros Kyprianou, CEO of Rymans Stationery came on stage to introduce us to the fabulous sponsors of the event, Rymans, DHL, Red Letter Days and iLaw.  He then introduced ‘his boss’, Theo Paphitis came on stage and gave a fabulous speech about being passionate about what you do, being persistant and not being shy about your business!  I could’ve sat and listened to him for hours!  He and Chris Wheeler from Metalfrog studios took us through the brand spanking new winners website, which offers everyone the opportunity to feature as Theo’s Business of the month!

After a fab lunch, we took our seats again for a question and answer session with Theo, Judy Naake, who successfully brought St Tropez to the UK market,  Julien Callede, founder and COO of Made.com and Rob Forkan of Gandys Flip Flops.   Rob’s story was inspirational, having lost both parents in the Boxing Day tsunami in 2004, him and his brother decided they wanted to help orphans in the area and set up their flip flop business from their bedroom with a view to giving a percentage of the profits to their charity Orphans for Orphans.  Last year they were able to open their first children’s home in Sri Lanka in time for the 10th anniversary of the disaster.

Question time was both fun and informative, several members of the #SBS family embraced the ‘Don’t ask, don’t get’ ethos and there were requests ranging from being someone’s mentor (Which Judy readily agreed to) to Kevin Colley of KGC Engineering asking if he could restore Theo’s next classic car,  Theo gave a resounding yes!!  I loved Kevin’s post on Facebook later saying that he couldn’t believe that Theo had agreed!

Towards the end of the day it was time to queue up for the highly coveted photo with Theo!  I must say, he must have facial muscles of steel given all the smiling he did during that session, the queue was just huge!!  I was so pleased to realise that just behind me in the line was Susan and Aye from Aye Gardening, I came to know Susan through the #SBSWIW hashtag, an unofficial group on Twitter who supported each other in the weekly bid to get noticed by Mr P!!  With just a few weeks until her fourth child was born, she was blooming!!  It was great to finally meet them face to face!  Then it was my turn to have my photo taken... 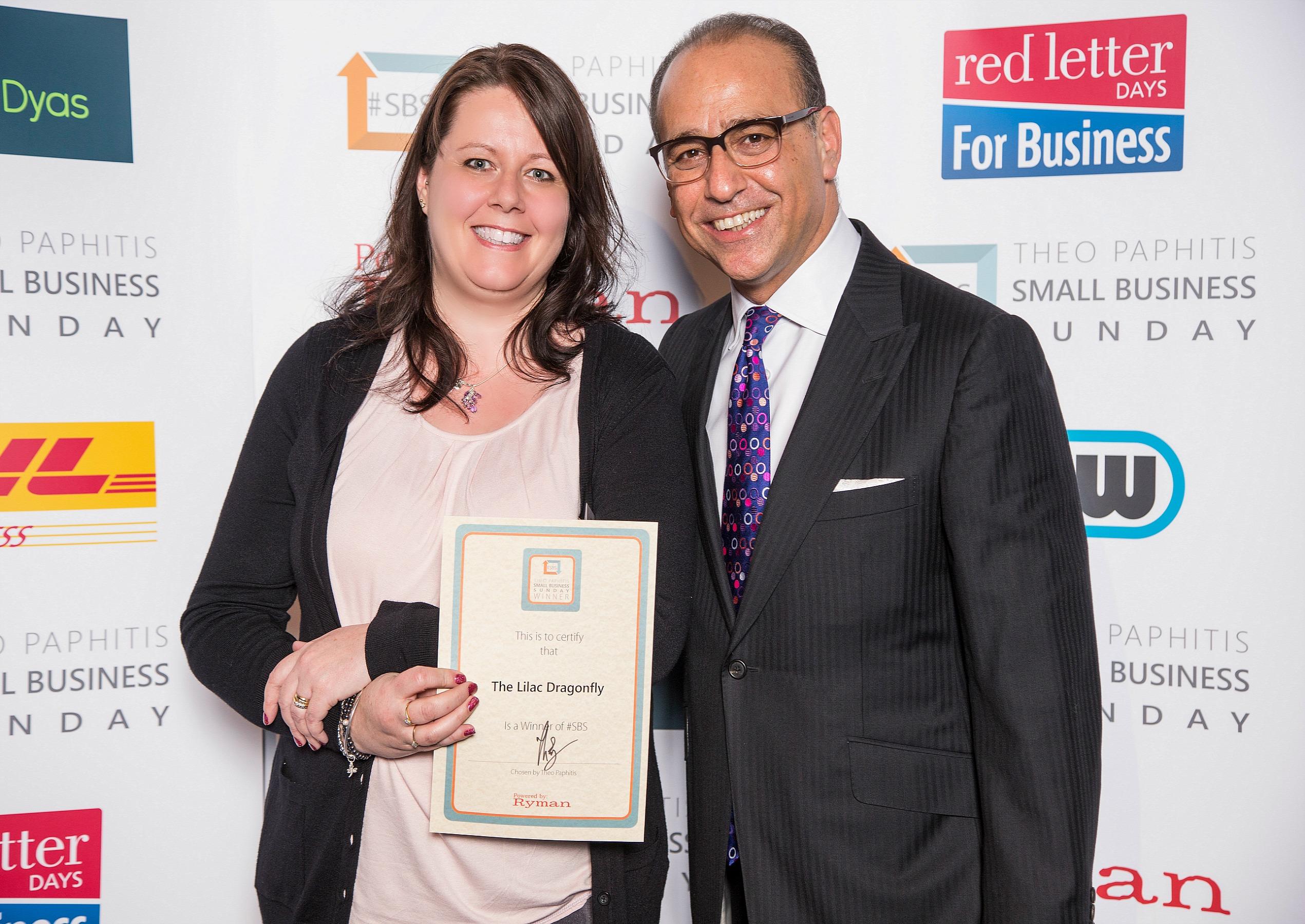 Then it was time to go, Sue and I collected our goodie bags (which contained loads and loads of stationery, I LOVE stationery), said our goodbyes, made promises for the next year’s event and went our separate ways.  Her to the station, me back to the hotel, where I collapsed in a heap and spent a quiet night in.  The only thing to mar the day was that I ripped my new coat on my room door, I was gutted as I’d only got it for Christmas.  I spoke to the manager who agreed to replace it, so I made plans to visit the Bullring the next day.

The next day I went to the Jewellery Quarter, wow, I was in heaven, gold, silver and diamonds everywhere I looked!!  I visited the Museum of the Jewellery Quarter which as fascinating!  Housed in the old premises of Smith & Pepper, a family firm that traded in the Jewellery Quarter between 1899 and 1981.  They closed in ’81 as there were no family members to take over the firm when the 3 Smith siblings retired. The buildings were locked and stayed that way for years before they were bought by Birmingham City Council.  When the council went into the offices and workshops it was like going into the time capsule, since then they have been restored to exactly how they’d been in their heyday.  It amazed me that many of the tools back then are still used today in jewellery making.  Not sure I could’ve sat on that stool from 8am to 6PM though.

I then made my way down to the Bullring!!  It felt like there were more people in that shopping centre than live on Jersey!  It was heaving!!  Made me realise how used I am now to small island ways.  Sadly I didn’t find a coat so I decided to make my way back to Broad Street, and here’s where it all went wrong….instead of turning left I turned right and got horribly lost and nearly ended up at Birmingham Football Ground…. (I had wondered where all the people in blue and white scarves were heading)  After being told I’d literally walked in the opposite direction to where I needed to be, I made my way back to Broad Street.  When I finally got back to my room, I collapsed on to my bed for the second time in 24 hours and apart from popping out for a takeaway didn’t move again until Sunday when it was time to go home.

The #SBS event was an amazing, fantastic day which will stay with me for a long, long time.  I hope to go again next year and will be braver, speak to more people and maybe even ask a question!  I will also make sure I wear sensible shoes and not get lost in Birmingham!  Many thanks to Tas Anastasi, who took the official photos on the day, some of which I have shared in this blog.

Well done to anyone who is still reading, I apologise for going on, but I had such a blast that I wanted to share!